Pontiac Bloc Metal 41 - The Irrestible Charm Of A Folding Camera 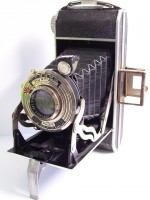 The Irrestible Charm Of A Folding Camera

Pontiac MFAP (“Manufacture Française d’Appareils Photographiques” that means “French camera maker”) is a french camera company who existed from 1938 to 1954 and was based in Paris. They produced different types of cameras, beginning with a 6×9 bakelite folding camera quickly replaced by a metal body: that’s the “bloc metal” and the number indicates the year of conception of this 6X9 folding camera using 120 film. They also produced a whole series of “Lynx” cameras in 2 versions, one intended for 127 film and the “Super Lynx” & “Baby Lynx” for 35mm film.

When Pontiac came with her cameras on the french market, there was very little place for a new competitor, as some french companies and mainly the American and German photographic giants dominated the market. But their chance came with the 2nd world war and the french defeat of 1940: the new totalitarian french regime (“State of Vichy”) forbid all new activities in the camera business and only those where born before the war could produce new cameras. And all camera companies who belonged to Jewish people where confiscated by the state (yes, France was an official antisemit state during these years….). And that’s how Pontiac was one of the only french camera maker to survive the war and produce new cameras in this time…
Enough history for know, let’s talk about the camera.

The Bloc Metal 41 was produced from 1941 to 1948, and was replaced then by the Bloc Metal 45 (produced 1946-1952). It has a 102mm or 105mm lens and various shutters (depending of the fabrication year), but all had a f:4,5 – 32 aperture (very atypical apertures indeed, like intermediates of 6,3 or 23…) and a shutter going from 1/25 to 1/150s with “B” and “T” (locking the “B” position). The focus ring goes from 1,50m to infinity and has intermediate positions on 2-3-5 and 8m. There’s also a little viewfinder with magnifying glass who can be rotated in horizontal or vertical position (to shoot easily in both positions) and a “sports” viewfinder (that means just a simple frame) on the top of the camera for quick shooting.

I was very curious to find the exact model of my camera and there I noticed something special about it: the last bloc metal cameras produced had a “Gitzo” shutter with a 105mm “Berthiot” or “Topaz” lens, but mine has this Gitzo shutter with a “Pontiac Anastigmat” 102mm lens of the earlier models. I didn’t find any precise information about this specific combination (there was apparently a “Gitzo – Anastigmat” 105mm lens model, but not with the 102mm lens) but that makes this camera very special for me, because it’s not exactly like the others and perhaps a rarity!

I finally went out shooting with this beauty and it’s really another photographic sensation! I chose a Lucky SDH 100 film (wanted a cool b&w vintage mood… ;) and it’s very easy to use, but I had the impression to reproduce the gesture of ancient times, and thought about the people who used this camera before me. I thought that this was what I like with old cameras, it’s the spirit of the past, and all former users of this camera, had left something in it, and now it’s my turn to use it and put my emotions in the pictures I take. How many people could have own this camera since the 2nd world war and what kind of pictures the lens had seen and taken before? That’s the sense of history, and the cameras are the witnesses changing hands and times, but the memory of the past is there!